For information about COVID-19 policies and restrictions on campus, please visit the UCLA COVID-19 resources website.

How to Applyto UCLA Graduate School 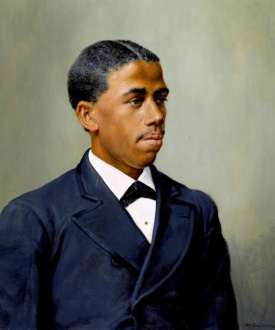 The purpose of the Edward A. Bouchet Graduate Honor Society is to recognize outstanding scholarly achievement and promote diversity and excellence in doctoral education and the professoriate. The Edward A. Bouchet Graduate Honor Society seeks to develop a network of preeminent scholars who exemplify academic and personal excellence, foster environments of support, and serve as examples of scholarship, leadership, character, service, and advocacy for students who have been traditionally underrepresented in the academy. In the spirit of Edward Alexander Bouchet and the scholarship, character, leadership, service and advocacy he exhibited both inside and outside academic realms, inductees into the honor society bearing his name must also exhibit these same outstanding qualities.

The Five Thrusts of the Bouchet Graduate Honor Society

Scholarship: The Bouchet Graduate Honor Society is a learned society that is committed to the goals of lifelong education, as well as the production and the dissemination of knowledge in the humanities, social sciences and sciences. Members are scholars who are committed to contributing to the development of their field(s) of study and who seek to ensure excellence and innovation in these fields.

Character: Bouchet Graduate Honor Society members must exhibit the highest values of their university, through their integrity, honor, and exemplary conduct and behavior. Character may be exemplified through an individual’s emotional courage, principles, endurance, and the ability to follow through long after the excitement of the task is over. He or she must be reliable and consistent. At each member’s core must be an awareness of the importance of contributing to society and working for the good of society.

Leadership: The Bouchet Graduate Honor Society is comprised of scholars who take personally their responsibility for their departments and their academic fields on a local, national, and international levels, as necessary. Bouchet Graduate Honor Society leaders are the embodiment of the ideals of their respective universities. They not only represent the mission of their university but they must also demonstrate strong initiative.

Service: Each member should actively contribute to the well-being of society by giving, remaining involved in the community, sharing of personal gifts and talents, and exhibiting a Bouchet-like commitment to the service of others.

Advocacy: Each member should actively support and advocate for broader access to graduate education and other resources within the academy. Activities might include advocating for the concerns of diverse faculty members and students, serving as a mentor, helping to address the needs of communities, and educating others on the issues that may be at the heart of the continued inequities and disparities in our society, particularly in education.